​Carl and JoAnne Hair's 1956 Power Hawk, Studebaker
In 1984 Carl bought a 1955 Commander, Studebaker---a piece of junk--I might say. I thought it was beyond repair, however we went to work on the vehicle and about two years later completed it. This was during our "courting" days, so Carl & I spent many a week-end in the garage---- working on the car. We were married in September, 1987 and went to Asheville, NC for our honeymoon---in the 1955 Commander--to a Tri-State Studebaker Convention. Later we sold that car and bought this 1956 Power Hawk, Studebaker from a guy who worked with the Town of Smithfield garage. He drove the car to work every day, but it didn't look like it does today. Well, we bought this car in 1987, took it completely apart, restored it from the bottom up. At first we had a 427 motor---Power---would you say. Because I said Red was my favorite color, Carl painted the car Carmine red & white. It has a red & white vinyl interior that I did myself and am very proud of. The car now has a 350cu. in. 330 horsepower new GM crate engine with 700 R-4 automatic overdrive transmission with lock-up torque convertor. We have also added air-condition, wide white wall tires, and wire spoke wheels. This car looks original outside, but we have modified everything else. We have driven this car since 1988, it has the same paint & upholstry since we restored it. This car really means a lot to us as we drive it to Asheville yearly as our Anniversary celebration. We have won 1st, 2nd, or 3rd place trophies almost every year since we've had the car. We are members of the Southland & the Studebaker Club. Our grand-daughter, Brittney, has been going to these events with us since she was almost 2 years old, she is now 21, with a little one on the way.  If all goes well,  one day the car will be hers.
Thanks, Jo Anne 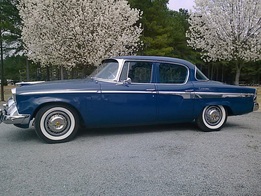 Well, folks, here it is-----the finished product of the 1955 Commander that Carl has been restoring since September, 2014. All the gifts that we usually give to each other have actually been parts for the car. When we purchased the car in September this is what we decided to do. For Christmas we got two hubcaps each, and for Valentines day we got a side mirror each----just like husband & wife---you can’t have one without the other. I think they were pretty neat gifts myself, and the car looks great. The other things we bought for the car were just because gifts----just because it’s what was needed to get it finished. I don’t know what we would do without a Studebaker, after all Carl purchased a Studebaker before we were married----and on weekends we spent most of our time working on it. As most of you know, after we were married in 1987, we went to Tri-State for our honeymoon. I  think that would classify us as Studebaker-Addicts, wouldn’t you think? We have truly enjoyed being members of the Studebaker Club, and would like to challenge each of you to put your restorations projects in the newsletter. If we all did this, Joe wouldn’t have any problems having articles to fill up space. Believe me, I know how hard that can be sometimes as I was once your newsletter editor. 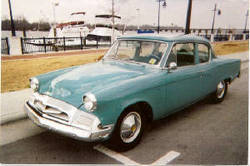 It is a 1955 Champion, Studebaker---blue-green exterior. It has original doors and trim. The seats are blue-green, and has a gray headliner. Under the hood is the original 185 Champion---Clean. I got this car from a friend in 2001. Restorations that I have done: Body, paint, upholstery, headliner as original. It took 2 years to restore, but I drove it most of the time while I restored it. This car did belong to Clinton Asby, but Daniel & I got the car in 2014. We hope to see you at many events with it.
​Owners: Ralph and Ann Freeman
Town: Carolina Beach NC
Car: 1954 Studebaker two-door hardtop Commander V8 automatic
Ralph owned a Studebaker in the 60s when he was in high school. He spent the last 20 years trying to find one like it. He finally located one on eBay in Alabama that had to be brought back by trailer to NC. This forgotten one time beauty had been stored in an old barn for 30 years. It was full of wasp nest and nuts where the squirrel’s had made a home. The restoration began 4 years ago. The Studebaker took three years to finish and be road ready but it was a labor of love. Many hours and miles were involved searching for those elusive parts. The great thing about that was making some lifelong friends along the way. As we all know the old car collectors are the salt of the earth and always willing to help other car lovers along the way.
Since the restoration the car has won many awards including best of class to the best of show. Every show it has been entered it has one a trophy.
We would like to thank Stanton James of the James Brothers garage in Ivanhoe NC for engine, paint, body work and much time and patience.
Powered by